Prosecutions against executives accused of fraud in connection with backdating stock options have been plagued by prosecutorial misconduct. In August, the Ninth Circuit reversed the conviction of Gregory Reyes, former CEO of Brocade Communication Systems, due to prosecutorial misconduct. Last week, Judge Carney of the Central District of California dismissed charges against former Broadcom executives with prejudice, entering a judgment of acquittal for one.

Stock-option backdating is a practice in which an employer grants stock options to an employee, retroactively dated to increase its value. Backdating itself is not illegal, but it must be properly disclosed in financial records and filings with the SEC. This article, published at the beginning of the backdating scandal in 2006, explains the history and controversy of backdating options. The SEC began charging corporations and executives in enforcement actions relating to backdating in significant numbers in 2006, and criminal charges have resulted in a few cases. The SEC has continued to bring enforcement actions against corporations and executives for secret backdating of options.

US v. Reyes was the first, and most high-profile, of the criminal cases. Reyes’ defense was that, although he had signed off on backdated options, he had relied on Brocade’s finance department to properly account for the backdated options in the corporate books and was not responsible for false records. The government put up a witness from the finance department who testified that she and other employees in the department did not know about the backdating. However, higher-up finance department employees had told the FBI that they did know about the backdating, but those witnesses did not testify because they were subject to possible criminal prosecution and had been targets of SEC civil suits. In the prosecutor’s closing argument, he told the jury that “finance did not know anything” in direct contravention of the statements given to the FBI. The Ninth Circuit stressed the special duty of federal prosecutors not to impede the truth and remanded the case for a new trial, which is scheduled for February.

Even more egregious prosecutorial misconduct occurred in the backdating cases against former executives of Broadcom. In May 2008, the SEC charged former CEO Henry Nicholas, former CFO William Ruehle, chairman and chief technology officer Henry Samueli, and general counsel David Dull with a backdating scheme. All but Dull were charged criminally, as well. Samueli agreed to a plea deal and the prosecutions of Ruehle and Nicholas went forward.

Ruehle’s attorneys first accused the prosecutor of misconduct in October 2008, when AUSA Andrew Stolper leaked confidential communications with counsel for the defendants to reporters for the L.A. Times and the Wall Street Journal. Stolper initially denied the allegations, but has since admitted to the conduct, calling it “the stupidest thing I’ve done in my career.” However, a more complete picture of Stolper’s misconduct eventually emerged. Stolper intimidated and improperly influenced each of the necessary witnesses for the defense. We have included portions of the transcript from December 15, 2009, when Judge Carney of the Central District of California dismissed the backdating cases, explaining:

Nancy Tullos was Broadcom’s vice president of human resources. This is what Judge Carney said of Stolper’s conduct regarding Ms. Tullos: 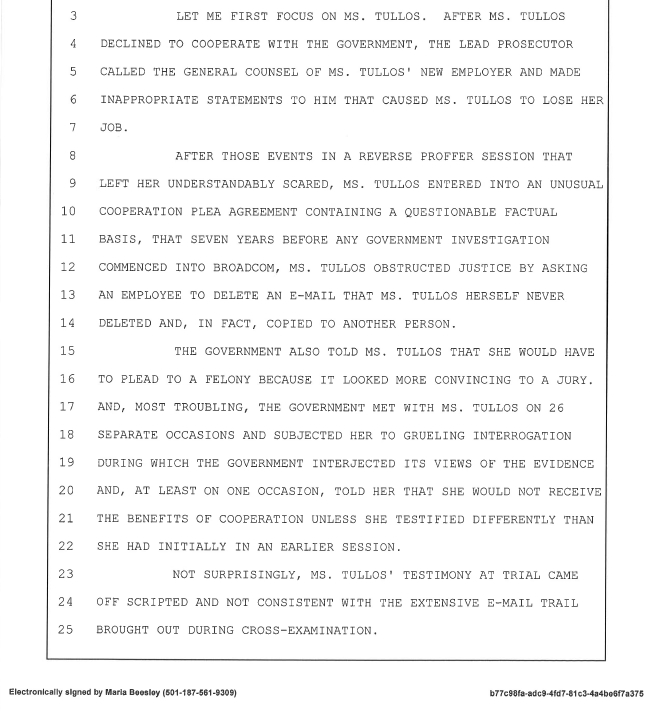 The judge had this to say regarding the intimidation of Mr. Dull: 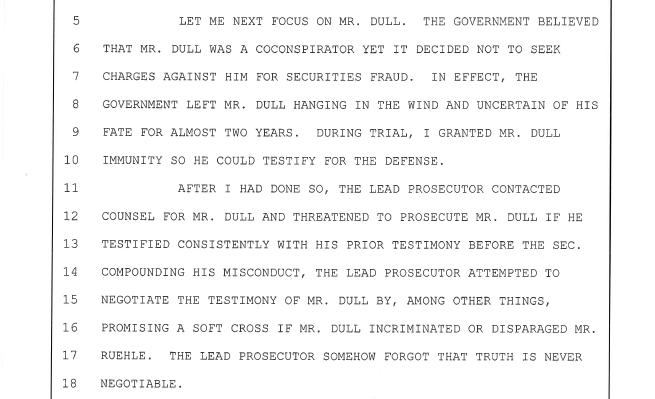 Judge Carney was particularly concerned with the prosecution’s disgraceful treatment of Mr. Samueli, whose guilty plea he vacated on December 9, 2009: 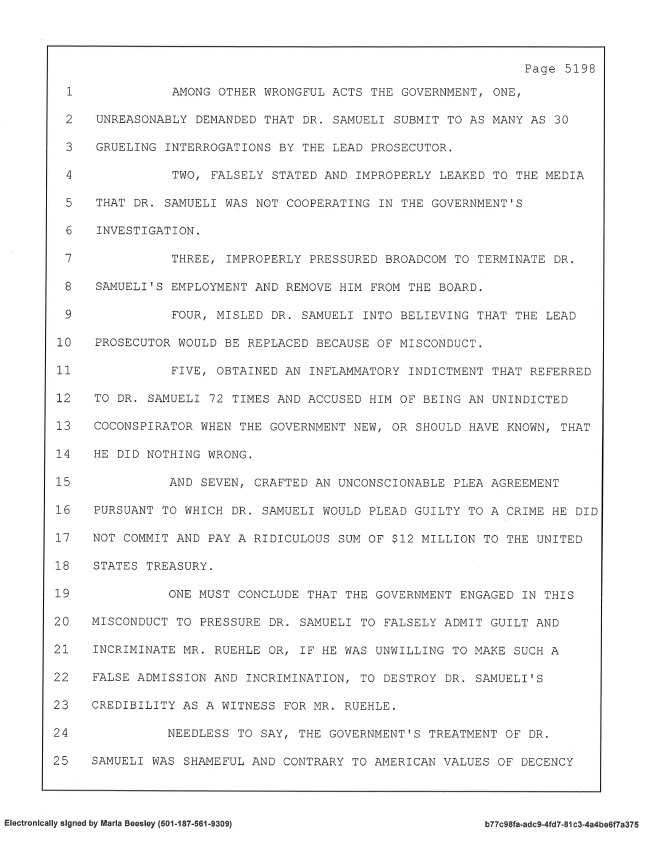 Judge Carney noted that, in addition to the misconduct, because the witnesses were improperly influenced, their testimony was unreliable and must be stricken, leaving insufficient evidence to convict Mr. Ruehle. For that reason, the judge dismissed the indictment with prejudice and entered a judgment of acquittal for Mr. Ruehle.

Because Nicholas needed the same three witnesses for his defense, he was also denied compulsory process and would not be able to receive a fair trial. For that reason, Judge Carney also dismissed the stock option backdating case against him with prejudice. Nicholas is also charged in a drug distribution case and will likely call the same witnesses in that case. The judge ordered the government to show cause why that case should not also be dismissed. He noted that other evidence of government misconduct will be admissible at that trial, including a threat to force Nicholas’ 13 year old son to testify before the grand jury.

In addition, Judge Carney dismissed the SEC case without prejudice and discouraged the SEC from proceeding with that case any further. 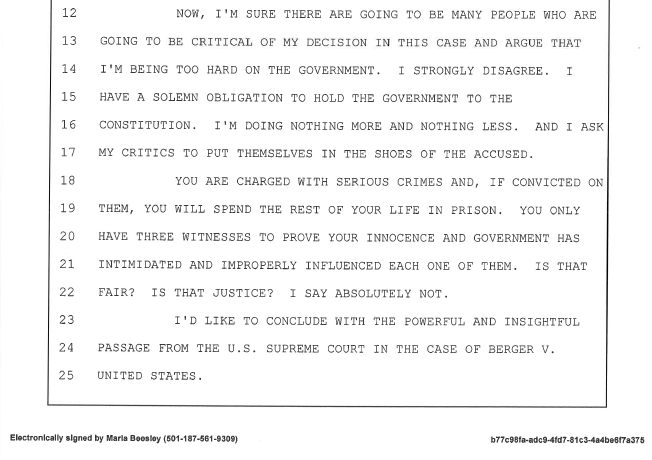 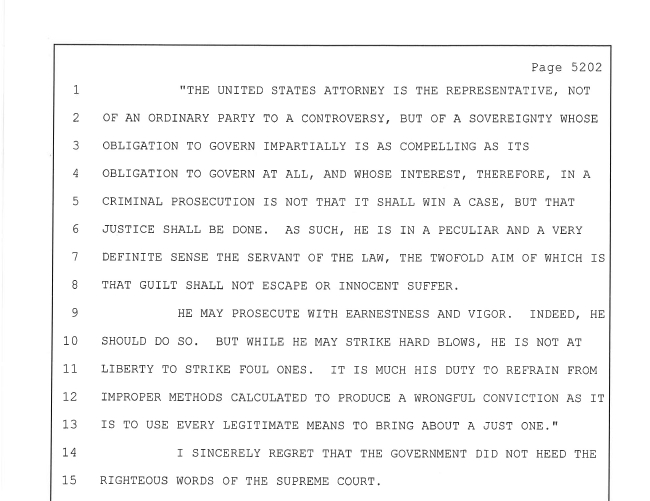